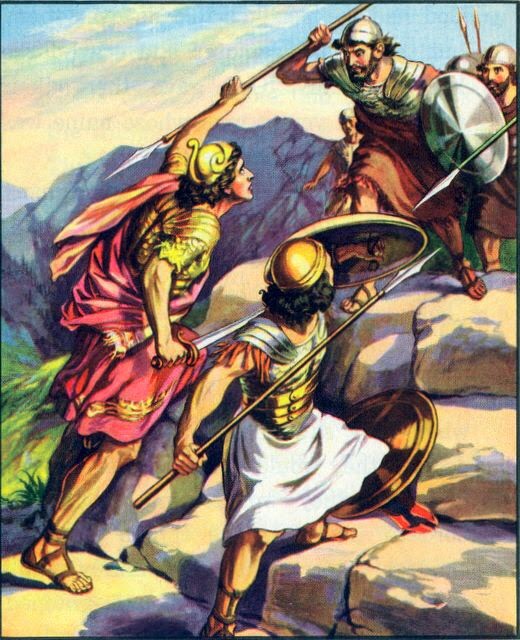 Early in King Saul’s reign over Israel, he mustered a force of several thousand to revolt against their oppressors, the Philistines.  After an initial victory led by his son Jonathan, who was about 15 years old, they watched the enemy assemble a massive force for the next battle.  Saul summoned more troops, but as the men saw what they were up against, they fled and hid in the countryside. With his numbers dwindling, Saul rushed to boost morale by offering an animal sacrifice which only a priest, not himself, was authorized to make.  For this fear-based and irreverent action, the throne would one day be taken from him (see 1 Samuel 13).

Days later, when the Israelite force had shrunk from 3,000 to 600, Jonathan snuck out of the camp with his armor bearer, saying, “Let’s go across to the outpost of those pagans… Perhaps the LORD will help us, for nothing can hinder the LORD. He can win a battle whether he has many warriors or only a few!” (1 Samuel 14:6, NLT).  What a contrast to his father’s hesitant, box-checking faith! The outpost was in a steep canyon, so that they would have to climb up in full view of the enemy. Jonathan looked for a sign from God in the soldiers’ initial reaction to seeing him, to know whether to continue. But Scripture gives us no indication that his risky move to go in the first place was prompted by a specific word from God. Was Jonathan absolutely nuts, or was he onto something?

Jonathan and his armor bearer killed twenty soldiers.  Immediately afterward an earthquake came, and the whole Philistine camp fell into confusion. Saul’s force rushed in to attack when they saw the enemy scattering. That day six hundred men, without swords or spears (13:19-22), routed an army with 30,000 chariots, 6,000 horsemen, and warriors “like the sand on the seashore” (13:5)!  Even the Israelites who had previously fled or defected joined in to fight and plunder. And it had all started with the bold faith of two crazy teenagers.

What if God is poised to supply a victory in your family, your church, or your community, and He is just looking for a few crazy people to set it in motion? Will you be the one to step out in faith?